2012 Masters – And then there were four – Day Three Recap

Moving day is upon us where the Masters separates the pretenders from the contenders. It is on Saturday that the field narrows to a select few and the attention of the golf world closes its focus to those remaining players who have survived three rounds at Augusta National to grant themselves eighteen more h 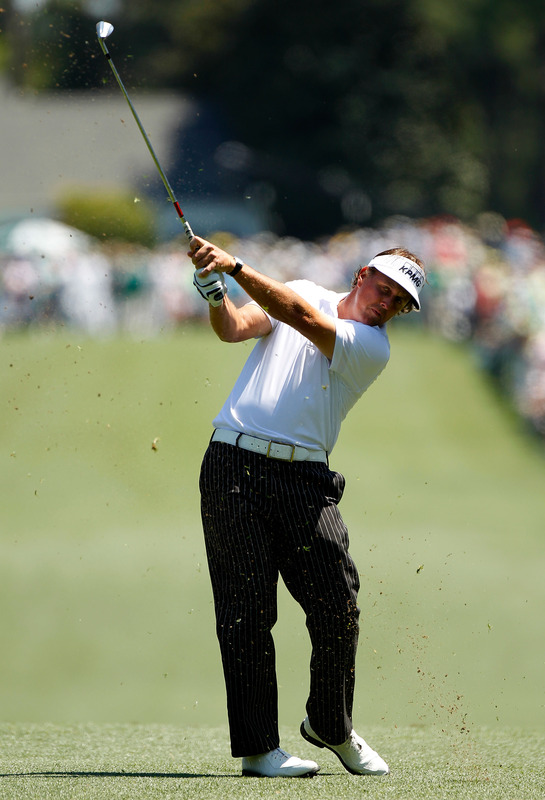 oles for a spot in history.

On a day that saw many of the crowd favorites, stumble back down to earth, it was Swede Peter Hanson, who shocked the Augusta crowd with his blistering 7 under 65 that has earned him the honor of playing in the final group on Sunday with a one stroke advantage. After Hanson’s bogey on number one, his control was never in doubt as he went on to birdie eight of his last 17 holes including a birdie on the difficult eighteenth to close with a third day round that few have ever witnessed.

It is difficult to say with any degree of truth that Hanson was on anyone’s radar to win this year’s Masters prior to today. However, one of the many beauties of Augusta is that it can allow a player such as Hanson, to stick around par for two rounds and then catch fire to vault to the top of the leader board.

With Hanson’s limited experience playing in the final group on Sunday, the question now becomes whether he, with only 5 top five finishes and zero PGA tour victories, can sustain the intense pressure to finish with the most solid 18 holes of his life. What puts Hanson’s ability to finish in further question is the fact that despite his superb round, there is another player that equaled his play and, to the tune of three green jackets, already has a proven track record of Master Sunday greatness.

Phil Mickelson’s front nine gave no indication of what he had in store. However, if there is ever a player who is able to seize the fullest amount of momentum based on one hole, it is Phil. There was never a better showing of this ability than the round changing eagle that he had on the 13th. Whole heartedly acknowledging that his pushed tee shot received a fortuitous bounce, Phil capitalized fully by striking an iron to within 25 feet and then snaking in the putt to the roar of the crowd. Judging by the emphatic fist pump that ensued, it was this moment where Phil grasped momentum with two hands and stated that the game was officially on.

Although many will believe that the champion will evolve out of the Mickelson/Hanson final pairing, there are several others who were able to stay in contention despite the astonishing rounds that were posted by these two golfers. Ice water in the veins Louis Oosthouzen, who seems to have staked a solid spot on the bottom of the first page of the leader board for a majority of the week made further progress today by posting his third subpar round to finish at -7. Bubba Watson has also slipped into the equation with his two under 70 that puts him only 3 back.

The Dream Final Pairing is Gone

Whether golf fans were hoping for an age versus beauty or power versus power final round, their dreams will have to be placed on hold for another year. Woods, after his tirade on 17 yesterday was as good as gone. However, if there were any apologists who held out hope that he could still make a charge today, those hopes were dashed when Woods closed out with an uninspiring nine pars on the back nine to card a 72.

McIlroy once again showed that he was not ready for the Master’s spot light as he reverted to last year’s form by shooting a 6 over par 78 that is sure to place further questions into his head of whether Augusta National is a course that suits his game. Last but not least, the dream of Fred Couples kicking aside the aging mystique has been squashed. Fred was able to stay in red figures however, his two over 74, showed just how difficult this course can be for players who do not have the same consistency they once did.

It is time to put the questions to bed as now only 18 holes sits between the long debated questions and the eventual answer. Can relatively unknown Peter Hanson, bottle some of today’s magic into a final round that will spell his first victory on the PGA tour? Will long ball hitter Bubba Watson or Louis Oosthuizen capitalize on the par 5s and survive the difficult and narrow par fours to claim their first major title? Or will Mickelson, with his gregarious personality and charming smile, endear himself to the Master’s crowd once again and stake his claim to being golf’s greatest? Only tomorrow will tell the tale, a tale I cannot wait to witness.

If you ask this golf blogger, Phil Mickelson will be walking off the 18th, on his way to yet another green jacket. Also, I don’t think Tiger is done yet, I think we’ll also see another top six finish for Tiger Woods.