2012 Masters – Glancing back at Greatness

As we gear up for the 2012 Masters, most media (myself included) is discussing the future and who is going to walk away with this years green jacket. I thought it would be a great exercise to take some time to look in the past as well to see where the seeds the world’s greatest golf tournament were planted.

The history of Augusta National, which is home to the world’s most prestigious golf event is covered in history at every turn. Although the Masters has developed into a global event, the history of this unique golf course is filled with American tales that are a standard of our country and the individuals who have lived out its story.

In 1857 Baron Louis Matheir bought the Augusta National land with his son Prosper Julius Alphonse to run an exotic plant nursery. Through their purchase the father-son combination imported a wide array of trees and plants to fill the land with a look that was unique from the Georgia pines that had long dominated the landscape. After Mathier passed away in 1910 the land remained dormant for nearly 20 years.

In 1930, fresh off his retirement after winning the only single year grand slam in golf, Bobby Jones who was looking for property to build his dream golf course knew that Mathier’s property was where it should be built. As the foundation was already set for an exotic course filled with unique plant and tree life, Jones enlisted the help of Prosper’s son, Louis. At the age of 74 Louis walked the course while it was under construction to design a unique landscape. As is evinced by the many dogwoods, Azaela’s and other unique plant life, Louis’ footprint at Augusta continues to be seen to this day.

In 1933 the course was completed and Jones began sending invitations to some of the country’s best golfers to compete in the first Augusta National Invitational that was held in 1934. This event was won in thrilling fashion by Horton Smith, who birdied 17 and 18 to finish one stroke ahead of Craig Wood. The following year, the Augusta National Invitational was placed on the world wide golf map when a single shot propelled the event into the spotlight. 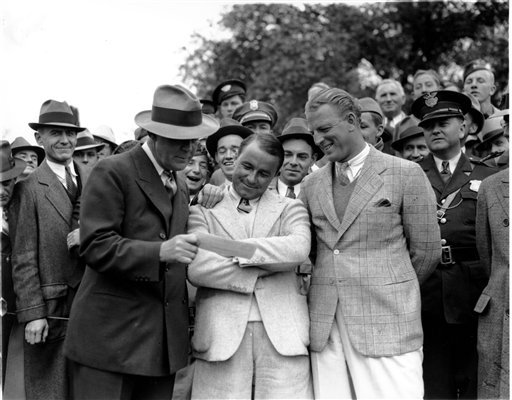 Trailing clubhouse leader Craig Wood by three strokes heading to the 15th, Gene Sarazen took a substantial risk by trying to hit the par five green in two. Using a four wood, Sarazen’s shot barely cleared the creek guarding the front of the green and his ball rolled up the slope and into the cup for an astonishing double eagle. He would go on to par the final three holes and would later beat Wood in a 36 hole playoff. Due to the roar of the crowd that ensued, Sarazen’s shot became known as “the shot heard round the world” and stand to this day as the most famous shot in all of Master’s history.

Influenced by Sarazen’s thrilling victory and the growing popularity of the event, in 1930 the Augusta National Invitational was renamed to The Masters. The transformation in name was an attempt to capture the increasingly talented field that made up the event each year. Although the most humble Bobby Jones was skeptical of the name change, it has become a proper fit in symbolizing the event that now represents the most prestigious in all of golf.

As the tournament continued to grow, and the course’s popularity became widely known, even the trees have become rife with historical significance. Of all of the members of Augusta National, the most famous was President Dwight Eisenhower who at the urging of then Master’s chairman, Clifford Roberts, joined the club in the early 1950s. Not known for his golfing prowess, Eisenhower was known to stray from the fairway on more than one occasion. No more was this prevalent than on the 17th hole where his ball would often strike a large loblolly pine that covered the left side of the fairway.

At a 1956 club meeting Eisenhower voice his displeasure with the menacing tree by petitioning the Augusta National board to cut the tree down. Roberts denied Eisenhower’s petition and since that time the tree has been aptly named “Ike’s Tree.” Beyond the influence of the historical

individuals who have walked Augusta’s grounds come symbols that represent the holes themselves. Of the many names constructed, none could be more telling of the history then the most dreaded three holes of them all that make up Amen Corner.

Amen Corner received its name after Arnold Palmer who, amid a rules controversy, played two balls on number 12. Palmer would later go on to eagle number 13 on his way to capturing his first Master’s by a stroke over Doug Ford and Fred Hawkins.

Influenced by the fortuitous bounce Palmer received and his love of Jazz, Sports Illustrated golf writer, Hebert Warren Wind named the three holes that defined the 1958 Master’s after the song “Shoutin` in That Amen Corner”.

As further bolstered by Larry Mize’s chip in 1987 to beat Greg Norman in a playoff and the many struggles professional golfers have had in navigating these three holes, the name has stuck around. The 18 holes that make up Augusta National are filled with historical significance that could never be fully captured except by walking the many monuments themselves. From Hogan’s bridge, to Rae’s Creek to everything else in between the Masters not only defines a rich piece of American history, but also grants each participant an opportunity to become part of the greatness that was created when one great man’s dream evolved into reality.