I read today over at ESPN.com that Tiger Woods 2012 will FINALLY have what many LONG time fans have hoped for, a chance to play at the home of the Masters,  Augusta National Golf Club.

Tiger Woods 2012 goes on sale March 29th, 2011, a few weeks before the 75th Masters. Gamers across the Wii, Xbox 360 and Playstation consoles will have the opportunity to play Augusta National by qualifying for and attempting to win the Masters.

Features in the Masters edition include a chance to beat each of Tiger Woods four scores when he won the green jacket and advice from an Augusta caddie. It will also feature the voices of announcers Jim Nantz and Davis Feherty from CBS Sports.

“There are many new and unique elements in the game that will make everyone feel like they’re really competing at Augusta National,” Woods said in a statement. “This is great for the sport and will connect a new audience with the Masters, a tournament I’ve been fortunate to experience since 1995.”

“Continually growing the visibility of golf is important to attracting newcomers to the sport, and I agree that showcasing the Masters Tournament in the game will bring an entirely new dimension to that approach.”

Support for WiiMotion Plus and Playstation Move is included but there’s bee no word on whether it’ll be Xbox Kinect. There’s a exclusive Collector’s Edition available for the Playstation 3 that will contain five additional courses.

There is, one thing missing from Tiger Woods 2012.. a picture of Tiger himself on the cover. 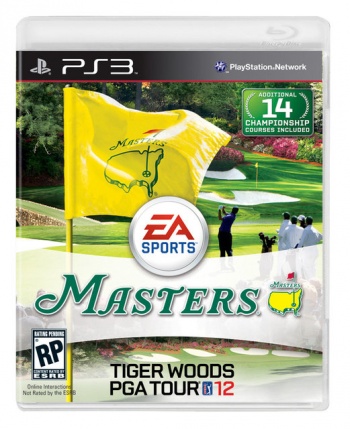 When questioned about the absence of the games namesake on the cover, EA’s Peter Moore had this to say:

“We like everybody else that’s involved with Tiger Woods and the game of golf in general, the Augusta club, are all anticipating a great year for golf this year and Tiger being very important in that.

“Obviously it was a difficult year last year, but you saw towards the end of the season Tiger starting to get back to his old ways. We all as both a sports industry and sports fans are hopeful he comes back in full force in 2011.

“He is on the PS3 version of the game [Collector’s Edition]. Our focus this year for this particular release is the Masters itself. You can see the iconic flag as part of the box art.”

Rumors are floating around that the company blamed Tigers bad press and subsequent cover portrait for the games dismal earnings in 2011.

I imagine this move had to sting a bit, I mean, after 13 years of having your face on the cover of a game that bears your name, this years cover has to sting a bit.

What do you think?

24 comments for “Tiger Woods 2012 includes Augusta but not Tiger”