Tiger Would – new brew from VOG for the Ryder Cup 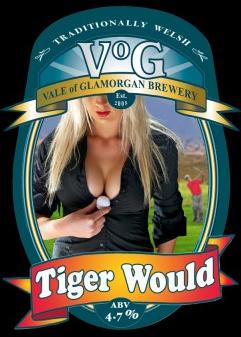 Just in time for the 2010 Ryder Cup, Vale of Glamorgan Brewery, located in Wales, UK has released a special beer to honor the occasion, or more specifically, one of the players in the field.

The brew is called “Tiger Would” and it It will be stocked in pubs in the Vale of Glamorgan, Cardiff and Newport. It features a nutty malt flavor with a long spicy hop finish.

Only 6,000 pints were brewed to support the occasion and there’s been interest from pubs and other establishments as far afield as California and Orlando, FL. (ahem..)

The first casks of the beer were sold this week, and is available for purchase online in limited edition bottles. Regrettably, it’s only available for online sale in the UK.. 🙁

VOG Brewer Dave Walbeoff said the drink was meant to be taken in a good-natured way.

“If Tiger Woods saw it I would hope he would still have a sense of humor after all he has been through,” Dave said.

The “Tiger Would” label features a well endowed blond woman holding a golf ball (probably a TaylorMade Penta :)) at the focal point that many of us lock-in at subconsciously.. In the background it also features a golfer swinging a club.

We all know the saying that “sex sells,” regarding the label, I’m sold.. 🙂

The fellas at VOG brewery are geniuses. They’ve got the hype surrounding the Ryder Cup to build on, a niche, tongue & cheek, yet slightly controversial product they’re selling and they delivered it in a way that pokes a little fun at Tiger Woods while also saying, “hey man, we’re cool with it, stuff happens and here’s a beer.”

I would love to try Tiger Would, if nothing else, the bottle would be a great collectors item. I’ve been bugging the brewery to send me some, so hopefully I’ll be able to report on it.