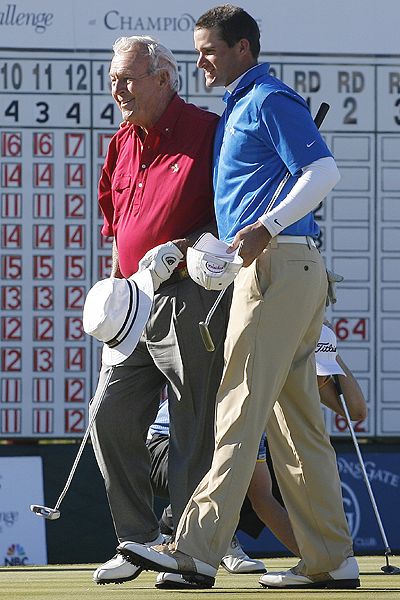 Sam Saunders, who played college golf at Clemson University, turned pro in 2009 and has been playing this year on the PGA Tour through sponsor exemptions.

With Bay Hill as his stomping ground and the King as his personal coach, Sam Saunders has jumped into life on the PGA Tour in 2010.

Sam Saunders will appear at the Winter Park Country Club Golf Lecture Series presented by the Arnold Palmer Hospital for Children and the North Florida PGA, on Monday, August 16th at 7:00pm.

Seating is limited and tickets are available for $10. All money collected will be donated directly to Arnold Palmer Hospital for Children.

Sam Saunders grew up in the shadow of Bay Hill’s clubhouse in Orlando. He didn’t start playing tournament golf until age 13, but picked up the game quickly, and won the Florida High School State Championship in 2004 as a junior at Trinity Prep in Winter Park. He later played three years at Clemson before leaving school early to pursue a pro career. He’s made seven starts on the PGA Tour in 2010, with his best finish at The Honda Classic in March (T17).

HOW MUCH: Tickets $10 at the Door; all money directly benefits Arnold Palmer Hospital for Children.

NOTE: Seating is limited; please call 407-599-3339 or email BrendonElliott@pga.com to reserve your spot!

I’ve been to a few of these lecture series and I’ve yet to be disappointed! If you’re able, you should definitely go, who knows, we might get a surprise visit from Arnold Palmer himself!